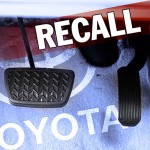 Toyota was recently fined a record $1.2 billion dollars for concealing safety defects.  This fine is a result of faulty accelerator pedals that may (or may not) have existed on their vehicle models.  Yes we need to be confident that the vehicles we drive are safe and have been developed according to standards that are designed to keep us safe, but the fact that the government can fine a automobile maker for not initiating a consumer recall sooner masks a big a problem.  Of the over five million vehicles that were recalled, how many do you think were actually fixed?  Toyota was obligated to apply the fix and the vehicles may have been faulty but what if I (as a consumer) forget to take my car into Toyota and get it fixed, or I throw the recall notice into the junk mail folder, then what?  Then nothing, the car doesn’t get fixed.  In the United States it is up to the individual owners to get their cars fixed, they can’t be fined, jailed, or have their cars towed away.  If any of those 5 million automobile owners decided not to get their cars fixed then that’s their perogative.  Toyota has done their part.  In the U.K, if a car is recalled and hasn’t been fixed the owner of the vehicle can be fined or even has his/ her car impounded.  This puts a bigger emphasis on owners to get their cars fixed and subsequently manufacturers are more wary of having their cars recalled in the U.K so it speeds up the rate or recalls.  My colleague Hair Bapuji and I wrote about this very difference and presented our paper (AIB 2012 – Kashef Majid) at the Academy of International Business Meeting years ago.